The History of ARGE Bulgaria

We are a group of philatelists interested in Bulgaria and East Rumelia, and since July 2000 we are registered as a working association in the German Federation of Philatelists (BDPh).

But first things first…It all began on November 7, 1999 with a meeting of five enthusiastic collectors of Bulgaria and East Rumelia in Weinheim, invited by Bernd Kleren. This event laid the foundations for our present association. 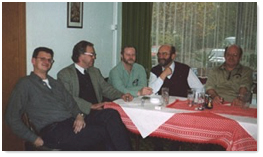 A short overview, leading back to the most important steps in our history