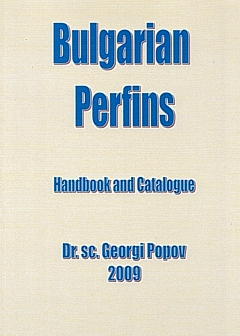 In 1993, a handbook on perfins with postal authorization („Postamtlich genehmigte Lochungen 1901 – 1952“) was published by G. Popov and R. Weinbrecht. To the author´s knowledge, this handbook is no longer available and the publishing rights belong to the co-author R. Weinbrecht. Meanwhile, some more publications to this exciting field have also appeared. For this reason among others, the author has decided to publish a new study about this field. Recent discoveries of perfins that were not mentioned in the handbook have been reported in the meantime, which will now be included. Some existing errors about the owners of perfins can thus be corrected. Also, a re-evaluation of stamps and stationary appears to be necessary at this time.

In general, this field of Bulgarian philately has become increasingly popular. While in the 1990es, stamps and covers with perfins were still relatively cheap, prices have virtually exploded in the last years, as can be observed on internet platforms like ebay or delcampe. A few years ago, stamps with perfins were often considered of lesser value – not just in Bulgaria. This however is not justified. Perfins reflect a significant part of postal history, as they were produced and used according to postal laws and regulations. Perforated stamps, and stationary in particular, are considerably rare. As in other areas of collecting, there are some rare pieces and even real `treasures´ among them.